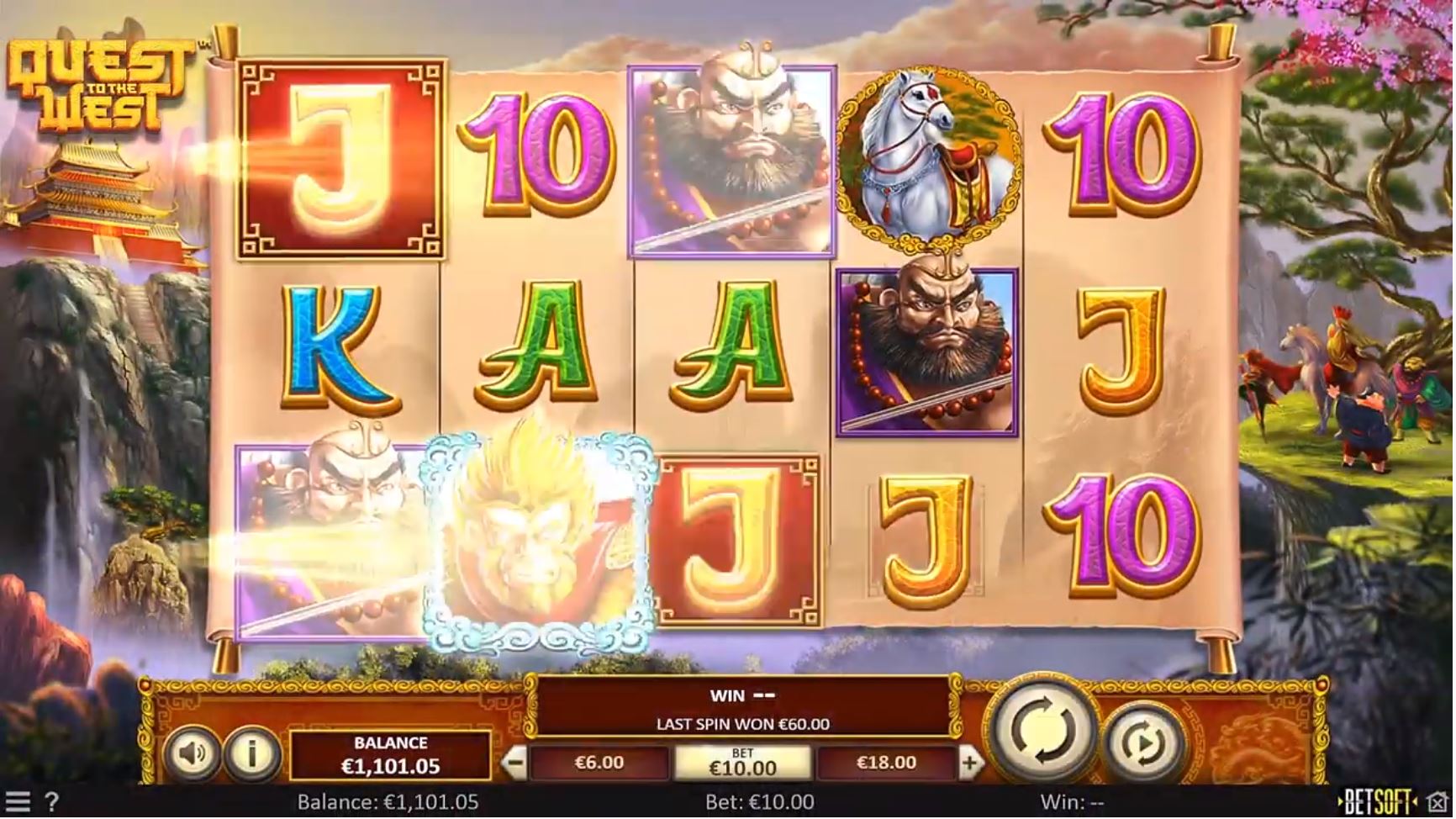 Quest to the West is an Asian-themed release from Betsoft that builds on traditional Chinese stories. The theoretical RTP of the game, for example, is stunningly high at 97.53%, and its presentation and gameplay bit doesn’t lag either. So, if you’re up for an Asian-themed journey, sign up at one of the top US online casinos and start traveling!

Quest to the West is a slot for all kinds of players, as its betting range goes from $0.04 to $80. There are 5 reels, 3 rows, and 25 fixed win lines that you have to play with at all times. The volatility of the slots for real cash is somewhere in the middle of the pack.

The production values of Quest to the West are excellent. The background and audio of the slot is particularly outstanding, but you’re also going to like its symbols that feature the main characters of the overarching story.

The atmosphere of Quest to the West is then a bit special as well. It’s fair to say that the final game is better than the sum of its parts, and we like how everything goes together. Thankfully, Quest to the West isn’t as bland as your typical Asian-themed game.

Quest to the West Slot Features

First, Quest to the West has its Wild symbols. These have the form of monkey kings since those play a huge role in the game’s story. On their own, they can show up on the board and substitute for other symbols, helping you out with a win here and there.

If you get three plus of these so-called Monkey King Wilds during a single game round, the Quest to the West Feature will begin right after the game pays out the base wins. Then, there are free re-spins with all active Wilds moving one position to the left with each. These re-spins continue until all Wilds disappear, and you can make the feature go on for a while by finding new Wilds during the respins.

Finally, there’s the Meter of the Heavens Feature that collects Wilds that fall of the reels. There are fifteen levels in total, and there are no checkpoints, so you need to collect fifteen Wilds during a single re-spin round to fill the meter. However, if you do, you’ll receive 1,000x your initial bet on top of your wins.

If you’re a bit unsure about all this, you can always check things out in the game’s free mode at one of our top US online casinos.

Quest to the West is an excellent real money slot, and it’s one no fans of Asian-themed games should miss. Take away its lowish top jackpot, and what you’re going to get is a perfect online slot with many positives.

We want to highlight the game’s splendid production values and massive theoretical RTP, but even the gameplay features are above par and worth seeing. If you are a jackpot hunter trying to pin down a sizeable one-off win for a minimal investment, however, Quest to the West isn’t really for you. If you had fun, we suggest you also try Cash Bandits 3.