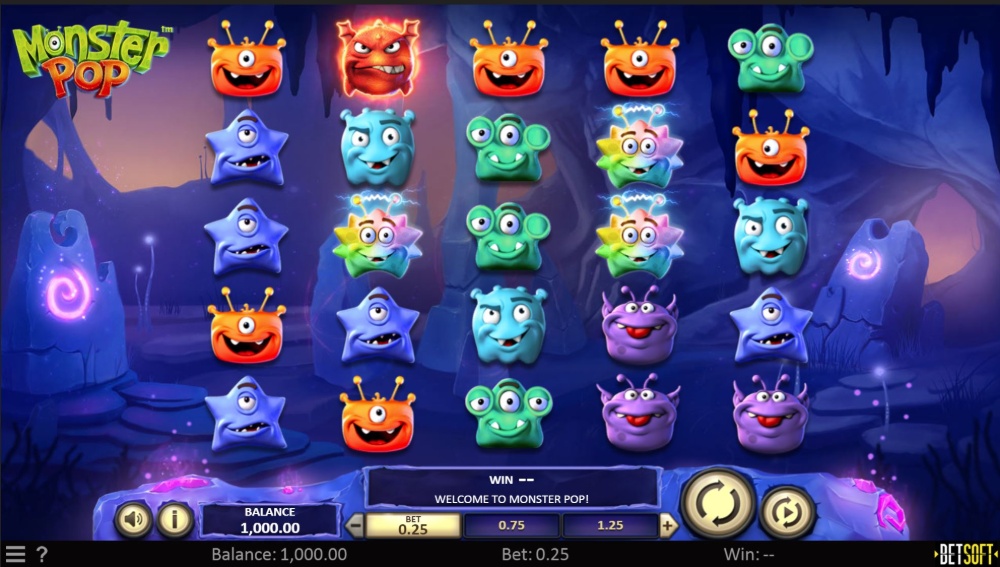 Monster Pop is a hilarious real money slot from Betsoft that is going to please fans of all things colorful, as it’s just lush and cute in all regards.

Betsoft packed Monster Pop with all sorts of funny monsters and then threw in a myriad of randomly activated features. Free spins aren’t missing either, so it’s just one big ride for all kinds of wins, high and low.

Unfortunately, there are some rough edges. The slots for real money has a theoretical RTP of just 94.67% being the most problematic one.

The volatility of Monster Pop is medium, which means that you are going to get decent wins relatively often. Its jackpot is reasonable at x2270 of the initial stake, but it’s not earth-shattering, and there’s no progression to it either. You can now play Monster Pop at our online casinos USA.

The entry-level stands at $0.25, but high rollers aren’t left behind either, as they can stake as much as $250 on any round. The game’s setup then has five reels and five rows at the minimum, and it uses cascading cluster payouts instead of win lines.

Monster Pop is all about monsters, and they are almost exclusive of what you’re going to meet on the slot’s reels. If that sounds a bit bland, don’t worry – there are significant variations between the monsters, and each one has its animations as well, so Monster Pop feels alive at all times.

Then, we also have to praise the game’s background and audio, as they are bound to lift your spirits. An ideal combination of a hilarious game – so gets excited!

The random features of Monster Pop star with Monster Cloner. This feature can expand the entire grid vertically, horizontally, or both vertically and horizontally. That gives you a better chance of winning, but the even better thing is that it also automatically duplicates a reel or a column. As if that weren’t already enough, it also adds a bonus Wild to the grid!

Next, there’s Monster Fury. This feature can appear after any non-winning game round and anger all monsters. Then, they can either make a bomb full of Monster Cloners, giving you a chance to get the entire grid bigger. Alternatively, they can do a bit of shuffling to turn the no-winning game round into a winning one.

Excitingly, all Monster Cloners that you get during free spins and that expand the grid in them stay active until the entire free spins feature runs out. This means that massive grids are a real possibility in free spins – and huge grids translate to huge wins!

Monster Pop is a real money slot with two sides. On one side, it’s a great and lush experience with a myriad of exciting gameplay bits that can keep everyone occupied for hours. On the other side, it has some severe negatives in its low RTP and jackpot.

Too bad then, as Monster Pop could’ve been a top-notch online slot, but, as it is, it’s only somewhat above average all things considered. It’s elegant, and you can have a lot of fun with it, but don’t use it for bonus clearance purposes and such!