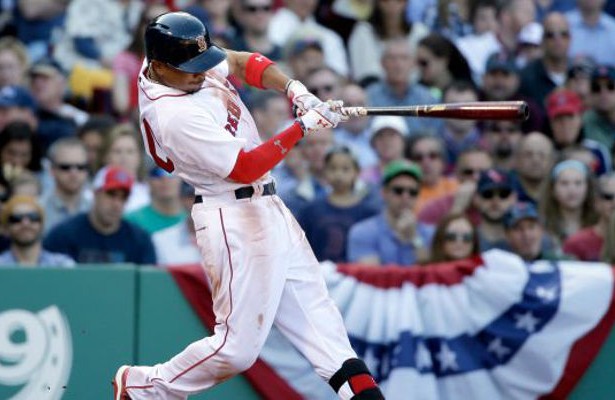 The Boston Red Sox made history! They hammered the Astros 12-3 in the third game of the ACLS series. Our top USA online sportsbooks cover the next games and the series in different live betting markets.

They became the first team in the whole MLB history to hit three Grand Slams in a single playoff series.

This achievement will stay in the record books for a while, too. Not only that, they could even go further and build on it by hitting another one. Or, two in the remaining games!

How the Game Unfolded

The Boston Red Sox was never the favorite in this year’s season. Instead, they had to stick to their guns and hope for the best. All that while playing their best. They did just that and they’re now as close to the title as it gets.

The expectations were high for the game even before it began. It didn’t even take that long for the fans to bet in droves.

Right in the second innings, the Red Sox scored 6 runs. Kyle Schwarber hit one out of the park for the historic third Grand Slam in a single series.

Ironically, the Red Sox hit three Grand Slams in their whole regular season. Only to score that many in a single series in the post-season now!

They wouldn’t get where they are now without some good pitching, though. Eduardo Rodriguez took to the mount and had a convincing set of 6 innings; before letting the relievers have their say.

Altogether, he kept the team steady and he’s ready to go. Could he be the one to make the Red Sox win the whole thing?

What Now for the Series

With the Red Sox leading 2-1, they’re now in a comfortable situation to get into the World Series. The stats are on their side nicely, too.

If you look at the history of the B-O-7 series. You’ll see that winners of Game 3 have gone on to win in 69% of all cases. Not too surprising given how tight the games are becoming and winning two in a row is just too tricky.

More importantly, the Red Sox is flying at the moment. They aren’t making any mistakes and they don’t have any weak spots in the chain either.

If they repeat one of their winning performances, they’ll win comfortably. Or even come close to those periods, that would suffice entirely.

After that, we’ll see the winning team facing either the Atlanta Braves or the Los Angels Dodgers for the trophy. It’s going to be the Braves more likely. They have a comfortable 2-0 lead in the series at the moment.

Of course, you don’t have to stay away from the action, either. Checking the odds at the time of writing, the Boston Red Sox were the favorites to win the fourth game.

MyBookie had them at -130, with Pivetta listed as the pitcher for the Red Sox. Trying to turn the tide will be Greinke.

That’s a legend in his own right and he’s +110 to keep the series going. If you think it will be an easy win for the Red Sox again, back the run handicap at +145.

The over/under line is 10 runs. Finally, you can bet at +100 for the overs and at -120 for the under. Confused by the terminology? Then take a look at our baseball betting guides!