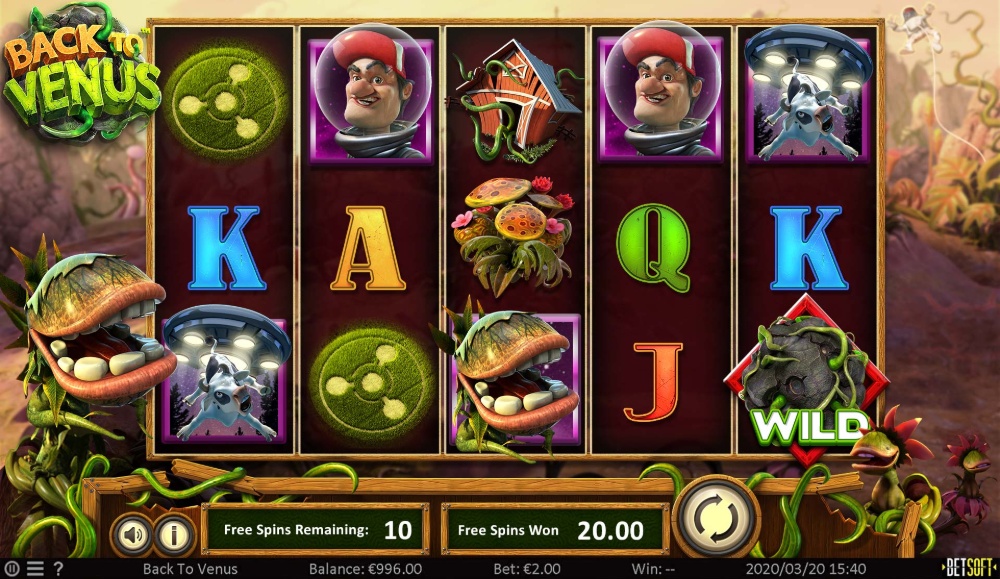 Back to Venus is a real money slot from Betsoft, and it’s a follow-up to the company’s It Came from Venus slot. That one wasn’t particularly great, but Back to Venus is better in almost all regards.

For example, Back to Venus has a nice x4338 top jackpot, and it couples it with an even better theoretical RTP of 97.07%. Throw in its excellent gameplay features, and the only thing that you might not like is the slot’s enigmatic production values that are just hit-or-miss.

You can already play Back to Venus at many trustworthy USA online casinos and even wager your bonuses through it!

The setup of Back to Venus consists of five reels, three rows, and twenty win lines. Players cannot change the number of active win lines in any way, but the entry-level to Back to Venus is pretty low. The slots for real money’s min bet is $0.20. While its max bet is $20, so high rollers are going to be a bit disappointed.

Meanwhile, the top jackpot of x4338 makes the game reasonable volatile and means that you can win as much as $86,760 when playing for max stakes.

The theme of Back to Venus is such that you’re going to be on a farm. It’s not an ordinary farm, however. Instead, it’s a farm with lots of aliens swarming above, so you can look forward to symbols with cows and UFOs, for example. Some plants and other farm bits added to the basic line-up of card ranks as well, with style being somewhat plastic.

With that in mind, it’s easy to split about how the game looks. It’s pretty nice, but it would’ve benefited from being in the oven for a bit longer.

Back to Venus Slot Features

Gameplay-wise Back to Venus has Asteroid Wilds. These Wilds occur on the last four reels, and they are sticky so that they can stay on the grid for two subsequent spins. You can take advantage of them two times then, which is cool.

Next, two features activate at random after the non-winning game round. The first is the Flowering Wild Boost. It can throw many Asteroid Wilds onto the board out of the blue and give you a massive chance of winning. The second is Prickly Sticky and Re-spin. This one makes one of the symbols sticky and then respins the reels until a win from the chosen symbol appears.

Back to Venus Free Spins

Back to Venus naturally has a free spins feature. These are launched through its Rocketships, and their shape depends on the number of triggering Rocketships. Three Rocketships guarantee ten free spins with Sticky Asteroid Wilds and better chances for regular Wilds. On the other hand, four Rocketships secure ten free spins with Sticky Asteroid symbols and Multiplier Wilds that both substitute for other symbols and multiply wins in which they feature. You’ll want to get the second, as that’s where the jackpot is available.

Back to Venus is an excellent online slot, but it’s not one for everyone due to its hit-or-miss production values. You might fall in love with them, and you might not, so we recommend you give the game a shot in its free mode at one of our top US online casinos.

Otherwise, it offers quite a bit, including a tremendous theoretical RTP and nice gameplay bits that don’t turn sour quickly.